From Alexander to Cleopatra 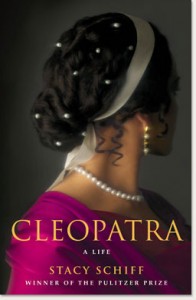 Reading the first few chapters of Stacy Schiff’s biography Cleopatra puts me in mind of another Cleopatra, the one for whom all the Egyptian Cleopatras were named.  She nearly became the first Cleopatra to rule Egypt, more than 250 years before the time of Schiff’s book, but died as a result of making the attempt.  I am speaking of Alexander the Great’s sister Cleopatra, the only full sibling of the great Macedonian king.  After Alexander’s death she was courted by no fewer than four of his former generals, principally because she could elevate them to near-royal status by marrying them. The last to attempt to wed her was Ptolemy I, already ensconced in Egypt where his descendants would rule for three centuries.  For unknown reasons, she accepted him after refusing the others — but that acceptance provoked a rival general, Antigonus, into ordering her assassination.  (Schiff incorrectly states that she was murdered by family members.)  Ptolemy built his authority in Egypt largely on the back of Alexander’s legend, even stealing the king’s corpse to adorn his new capital in Alexandria.  It is a fitting tribute to the power of that legend that the last ruling member of his dynasty bore the name of the conqueror’s sister.

It is hard to picture Cleopatra as a Macedonian woman rather than an Egyptian, but Schiff rightly forces us to do just this.  The arresting cover of her book shows a woman in European dress, with a distinctly light complexion.  Her face is turned away — a pictorial acknowledgment of the point Schiff frankly admits, that we have little idea of what Cleopatra looked like, except that — despite the Hollywood tradition — she was not considered to be terribly attractive.
Speaking of Hollywood, efforts are already underway to make a major motion picture out of Cleopatra, with Angelina Jolie playing the starring role.  I think this is a terrible piece of miscasting, almost as bad as the error that Oliver Stone made when he cast Jolie as Alexander’s mother, Olympias, in Alexander.  Jolie was too young for the latter role, just as she is too old, and too physically imposing, for the latter.  The directors of HBO’s Rome did much better when they cast Lyndsey Marshal as Cleopatra (below, with James Purefoy as Antony), a more diminutive actress better suited to the essentially passive role Cleopatra played in the Roman civil wars. The Hollywood ethos that demands a powerful actress and a big-name star to play such roles is about to again make a hash of history.
–James Romm, editor, The Landmark Arrian: The Campaigns of Alexander 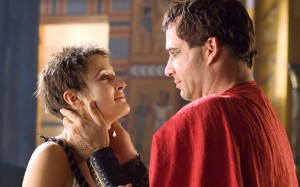 17. November 2010 by Arrian
Categories: Arrian-Alexander, Commentary | Comments Off on From Alexander to Cleopatra