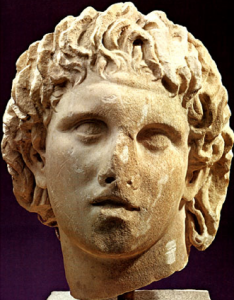 – Arrian’s Alexander the Great – In a New Voice
Free evening conference/reception in New York City at the NYU Center for Ancient Studies Thursday, Feb 10, 2011 at 6pm. Cohosted by the Reading Odyssey, Inc.

First in a series of weekly blog conversations between historians James Romm [JR] and Paul A. Cartledge [PAC], editor and introduction-author of the new Landmark Arrian: The Campaigns of Alexander, just published by Pantheon under series editor Robert Strassler.

JR: Paul, there are only a few people in history who are universally known as “the Great,” and Alexander of Macedon, who reigned and conquered much of the known world between 336 and 323 B.C., probably tops the list.  The word “great” in this context, to my mind, is always positive — implying both that Alexander’s achievements were huge in scale, and that his nature was heroic and awe-inspiring.  The question many in the modern world might ask, however, is: Do these two things go hand in hand? Perhaps in the scale of his achievements Alexander was Great, but in his nature Terrible — or perhaps even Terrible in both.  So as you and I begin this ten-part dialogue on the controversial figure of Alexander (a conversation made more timely by the recent release of Pantheon’s The Landmark Arrian: The Campaigns of Alexander), maybe it makes sense to ask: Does the appellation “the Great” still make sense for Alexander? Or is it an outdated holdover from an age when conquest and military expansion were more admired than they are now?

PAC: Jamie, I remember a (now very) senior Oxford colleague long ago telling me that all ‘great’ men were by definition bad men… Well, that may be so, but we historians shouldn’t primarily be concerned with our subjects’ morals, but rather with how and why they did what they did, and with what consequences, including among those our current appreciation of their historical significance. Whatever may be thought of Alexander’s morals, there’s no denying that he matters hugely – and always has so mattered, at least from the moment he was acclaimed king of the state of Macedon (which controlled ancient Macedonia – and much else), in the summer of 356 BCE, when he was barely 20. Very few historical actors have been called ‘the Great’, and Alexander is one of only two known to me (I stand to be corrected …) who have had that title incorporated in their very name: Megalexandros in modern Greek – the other is Charlemagne (‘Karl der Grosse’ in German, crowned Holy Roman Emperor at Aachen on Christmas Day, AD 800). Shakespeare has a character (in Twelfth Night) claim that some are born great, some achieve greatness, and some have greatness thrust upon them – I doubt myself that the first member of that trilogy makes any real historical sense, but Alexander’s parents, King Philip II and Olympias, were certainly memorable, and their extremely fraught union decisively shaped his first 20 years at least. But by themselves neither they nor his teaching by Aristotle when he was 13, nor any other aspect of his upbringing and background in that corner of northeastern Greece could by themselves account for Alexander’s truly astonishing 13-year reign (336 – 323 BCE). In the succeeding exchanges you and I will be re-examining all sorts of aspects of Alexander’s career, personality and achievement. Here let me kick off with what I consider to be unarguably an argument in favour of his being called ‘the Great’, regardless of what side one happens to be on in any of the many other major controversies that still surround this larger-than-life figure. He was, as it’s been nicely put, a military Midas: as a general – off as well as on the battlefield, in strategy as well as tactics – pretty much everything he touched turned to gold, so long that is as he was pursuing strictly military objectives, whether defeating an enemy, or conquering and holding a territory. He was never defeated in a pitched battle, and in siege or guerrilla operations he suffered only relatively slight reverses at worst. This is not to say he never made a mistake, leading his men as he did over thousands of kilometres through the most formidable terrain for over a decade nonstop. But those mistakes never added up to an outright defeat. ‘Invincible’ the Delphic priestess had allegedly declared him in advance of his campaigning in Asia, invincible he proved. Death alone (by whatever means…) at Babylon in early June 323 BCE proved him literally mortal. Of course, if you happen to be a pacifist by conviction, you probably hate all that Alexander stood for as well as what he did in war, but, if the premise of war be granted, he was surely a formidably great generalissimo. JR: Paul, Your last point raises a question to which I’m afraid I don’t know the answer: When did Alexander first become called “the Great,” and by whom? I would imagine it was the Romans, with their great reverence for military prowess, that awarded him the honor.  I would think that the Greeks, who had very mixed and often adverse responses to Alexander — a topic we’ll be discussing in more depth in coming weeks — would not have called him Great, though their were some Greeks of the Roman Empire who very much admired him.  Among these was Arrian, a Greek writer and intellectual who became a top administrator in the Roman empire, and who wrote one of the most important accounts of Alexander that survives from antiquity:  The Anabasis, translated “Campaigns of Alexander” in the new Landmark edition.  PAC: Jamie, it seems that the earliest certain surviving reference to Alexander as ‘Alexander the Great’ is in a play by the Roman New Comedy author Plautus (flourished c. 200 BCE), whose plays were based, often very closely, on earlier Greek originals, so we can confidently (I think) say – it was at some time before 200 BCE! (This site – http://pothos.org/forum/viewtopic.php?f=2&t=2311&start=0 – contains some relevant stuff, along with a lot of irrelevance.) But I would at once add that in itself the title doesn’t matter all that much: what does I think matter a lot is how he was perceived by, on the one hand, the movers and shakers of the immediate post-Alexander Greek world, and, on the other, by ‘ordinary’ Greeks of that same ‘Hellenistic’ (as we scholars know it) world. The former group, that is the rival kings and dynasts and would-be kings and dynasts known collectively as the ‘Successors’ and ‘Epigones’ who slugged it out for well over a generation (323-281 BCE) all to a man (re)presented themselves as Alexander-clones. The latter group included many Greeks living in Asia Minor, who had been liberated from alien barbarian Persian domination by Alexander, and who worshipped him as a god. Without any compulsion, it would seem. You ask whether I might add something about the topics we’re going to go on to discuss in this exchange. With pleasure – here are some possible topics we could argue the toss over: Did Alexander participate in the  murder of his father? How good a historian was Arrian? Why did so many Greeks hate Alexander – whereas others (literally) worshipped him? Was Alexander as great a general as he’s usually cracked&
nbsp; up to be? Was Alexander a religious fanatic? How genuine was Alexander’s Hellenism (love and promotion of Greek culture)? What really was Alexander’s relationship with his right-hand man
Hephaestion? or/and What did Alexander really think of women? How genuinely Asian was Alexander’s style of kingship? Who or What killed Alexander? What was/is Alexander’s Legacy – what has he done for Us?